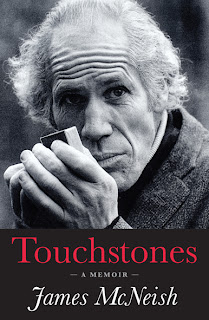 It’s a basic principle in book-reviewing that books have to be judged according to their genre. Pointless to discuss a children’s book as if it aimed to be A La Recherche du Temps Perdu, or a learned academic discourse on the assumption that it should be a popular vulgarisation.

I say this very clearly from the outset because it would be easy to mistake James McNeish’s Touchstones for a full autobiography. And if it were judged as such, then it would have to be considered very selective. “Why has McNeish left all these important details out?” a hostile critic might ask. Instead, as McNeish considerately and specifically explains a number of times, Touchstones is what its subtitle calls it - a Memoir, not an attempt at comprehensive autobiography. The title page adds the words “Memories of People and Place”. About two-thirds of the way through the text (on Pg.210), the 80-year-old McNeish further admits that he has a faulty memory, a “writer’s memory”, and that some of his reminiscences may be embroidered.

What we are getting, then, are the parts of his life that McNeish regards as most significant in his development as a writer.

After a kind of prologue, Touchstones begins in the 1950s, when McNeish was in his late twenties, and fades out in the 1980s – this being less than half the writer’s life. Interspersed with extracts from his old diaries and commonplace books, the first half is called “People” and concentrates on nine people who had a big influence on him.

When McNeish was a young journalist, a night editor on the New Zealand Herald fired his imagination with the prospect of visiting Europe (being a budding writer, young McNeish was taken particularly by the chap’s mention of “purple cauliflower” in Sicily). So at the age of  26, McNeish took off from Auckland as a deckhand on Norwegian Freighter.

In England, he spent a few months as a stagehand and “electrician” at the left-wing director Joan Littlewood’s tumbledown Theatre Royal. McNeish endorses the obituarist’s description of Littlewood as the “The Mother Courage of English Theatre” and gives an admiring portrait of her as an erratic, impulsive genius. But he also tells the story of being asked by Littlewood to read a play submitted by an unknown teenager, and judging it to be immature “schoolgirl stuff”. He says the play was extensively re-written by Joan Littlewood before it was ever produced. It was  Shelagh Delaney’s A Taste of Honey. (The naughty side of me notes that Shelagh Delaney died late last year, so she won’t contradict McNeish’s story – but on the other hand it’s highly plausible as Joan Littlewood is widely considered to have also extensively re-written Brendan Behan’s plays before they ever saw the light of day.)

Getting a commission to record and make radio programmes about European folk-songs, McNeish found himself in Sicily. Here he met three remarkable people. The first was the anti-Mafia crusader Danilo Dolci who, like Gandhi, used hunger-strikes as a means of drawing attention to social injustice. McNeish ended up writing his biography, Fire Under the Ashes, and has subsequently revisited Sicily in his later fiction. The second was Toto, a man of the people with a fatalistic peasant’s wisdom, who found McNeish a place to live and taught him ways of fitting in with the local culture. Most intriguingly, the third was Santu, a very decent Sicilian man who believed implicitly in the code of omerta, the sense of discretion and loyalty to friends and “family” regardless of wider moral considerations, much deployed by the Mafia. To find such opinions coming from the mouth of such an obviously upright man was for McNeish a sharp lesson in how the sincere pieties of one culture are not necessarily those of another.

Back in London, as McNeish learnt how to write and read radio scripts, he was hugely influenced by the BBC producer Jack Dillon, who taught him how to use the microphone to effect. When he speaks of his time with the BBC, McNeish inevitably drops some illustrious literary names, but he also evokes powerfully that lost world of intelligent radio features that were produced as works of art for discerning audiences.

So far, this may sound like a catalogue of separate events and encounters. There are, however, some consistent themes. One is the way McNeish felt torn between a desire to return to New Zealand and an awareness that New Zealand was (and is) a very small intellectual pool providing a very limited market for literary works. In fact McNeish returned briefly to New Zealand a couple of times, sounding the place out, before deciding to re-settle here permanently. He makes it clear that he has never regarded himself as “limited to” New Zealand in the subject-matter he chooses for his novels and non-fiction; and he has some pungent things to say on the way New Zealanders can be very negative in their judgements on local literary talents who decide to make their lives overseas.

On one visit back, he recorded a typically tanked-up Denis Glover reading his own poetry while Glover’s common-law wife Khura hovered in the background. (I heard McNeish retailing comic detail of this same encounter in a radio broadcast some years back.) On another journey back to New Zealand, McNeish found himself the unofficial “minder” of the flamboyant Sheila Chichester, wife of the round-the-world yachtsman Francis Chichester.

These are eight of the people McNeish sees as influencing him. The ninth was far more important – his wife Helen, whom he met in London. Their courtship took some years to reach the point of marriage, overcoming a lot of cultural differences, differences of temperament and the fact that both of them had been married before.

If these nine people provide McNeish with chapter headings, then with the exception of his wife they were not necessarily always the most influential people in his life. McNeish’s ancestors and parents hover in the background of much of this memoir. His father was (in McNeish’s term) a  “quarter-caste” Maori descended from a nineteenth century Scottish “Pakeha-Maori” who had married into a tribe. McNeish considers that his father looked a lot less Maori than his Aunt Jean, whom he calls his “Maori aunt”. One motif in young McNeish’s life was the way his father (whom he seems to have loved more than his mother) clearly expected him to give up this writing nonsense and move on to a “real” job. After his father’s death, McNeish is therefore shocked to discover evidence that the old man himself was thwarted author.

When it reaches the halfway point, Part Two of this memoir kicks in. It is called “Place” and recounts how McNeish came to settle at remote Te Maika (near Kawhia) and write in earnest – this being the time when he produced his first considerable piece of fiction, the novel Mackenzie.

McNeish tells us that he found the view, and the economic necessity of writing pieces for the  Listener, distracted him from real writing. He learnt how to concentrate. But at Te Maika he also learnt gradually about his family’s back-story, the background to the house he inhabited and the dodgy land deals that had gone into its acquisition. “I am not superstitious”, he declares on Pg.180, but his narrative runs to a prophetic dream and the sense of a “presence” at Te Maika that makes it right for him to be there.

Strong in its descriptive sense, this second part also has its comic vignettes, not least his account of  eventually marrying Helen in a hasty ceremony conducted at the local post-office. Although called “Place” most of this second part is about becoming used to the company of local Maori, finally finding himself able to identify with bits of their culture and untangling a complicated story his “Maori” aunt had told him about how the land was acquired.

This is one of those cases where I hope I have been able to fire your interest simply by a giving a (very selective) account of the book’s contents. Illustrated with black-and-white photographs, Touchstones is a little under 300 pages of amiable chat by an experienced author.

I could pick out a couple of  minuses. The opening dialogue with his father, in 1967, is far too neatly self-expository to be credible and seems designed to sketch in some background quickly for us. There is also something painfully arch in the way McNeish attempts to pique our interest by telling us as one stage that his wife had “fallen in love with” somebody else (the somebody turns out to be Katherine Mansfield, in whom Helen became very interested).

The pluses outweigh the few minuses, however.

McNeish has the honesty to mention things that might be painful or embarrassing for him to recall publicly. When he refers to his first wife Felicity, he quotes Graham Greene’s “chip of ice that lurks in a writer’s heart” to explain how a determined writer can become estranged from a wife. But he then notes that “Felicity went back to London, then wrote accusing me of infidelity and saying she was returning to New Zealand with our child. The accusation was just, her outburst well-merited.” (pg.73). He admits (at pp.115-116) his almost complete ignorance of New Zealand Literature until he was nearly 30. When learning some lessons about morality in Sicily, he also refers to New Zealand prejudices thus:

“I had grown up with stereotypes. I had left New Zealand fiercely prejudiced, and Anglophile. Britain was best. The wogs began on the other side of the channel. Rome was the enemy: ‘Whatever you do, Jamie’, my father said, ‘don’t marry a Catholic.’ If it wasn’t the Catholics it was the Jews (my mother railed against the Jews, ignoring the fact that most of the artists and musicians she admired, not to mention the conductor of the Auckland String Players which she led, and whom she worshipped, were Jewish.) I inherited these prejudices uncritically. As for Sicilians, all I knew about them, chiefly from B-grade action movies, [was that they were] small, dark and sinister. They all wore cloaks and carried knives.” (pp.83-84)

McNeish doesn’t generally aim for one-liners. He likes to chew things over. But when he does one-liners he does them well. I loved  the way he summarises the reaction of publishers who were disappointed that he was he writing novel and not a biography of Mackenzie - “They wanted a photograph, not a painting” (Pg.189).

Touchstones is a delightful book which reads easily.

I have to end with a little paradox. Discussing his time at the BBC, McNeish remarks “Radio is only a glorified form of journalism, after all; the spoken word is not the printed word, and is often anathema to it.” (Pg.100). Yet my own view of this book is that an edited version would work very well as a series of radio talks.

I’m sure National Radio will decide the same in due course.
Posted by Nicholas Reid at 9:02 AM

Email ThisBlogThis!Share to TwitterShare to FacebookShare to Pinterest
Labels: James McNeish, Something New, TOUCHSTONES – A MEMOIR