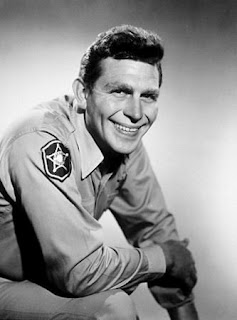 The week I am writing, the American TV star Andy Griffith has died at the age of 86.

I’m not going to give a sentimental retrospective on the man because, amiable chap though he seems to have been, much of his persona and style were not to my adult taste.

Nor am I going to do what some of the less gooey and more hip American obituarists have done (like the one in the Los Angeles Times, which you can check out on line). This was to remind readers that the single great big-screen performance Griffith ever gave was before he became a TV star. In Elia Kazan’s 1957 movie A Face in the Crowd (scripted by Budd Schulberg) the 31-year-old Griffith played a homespun, cornpone, just-plain-folks Southern fellow called “Lonesome” Rhodes who becomes a TV star by apparently guileless charm. But the film reveals “Lonesome” Rhodes to be a cruelly manipulative shyster who regards his worshipping audience as suckers for believing the sentimental drivel he trades in.

It’s a sharp satire on TV’s cult of personality, and it was rumoured to be based roughly on the 1950s American TV personality Arthur Godfrey. The irony is that homespun Southern charm was exactly what Griffith deployed during the eight years when he played the sheriff of Mayberry in the sitcom The Andy Griffith Show. Not that anybody is suggesting the real Griffith was anything like the fictional Rhodes.

Anyway, as I said, I’m not going to remind you of this.

Instead, the name Andy Griffith reminds me of a moment when my eyes were opened to the real nature of television.

There I was, aged about 13, watching The Andy Griffith Show on our single-channel black-and-white TV.

I wasn’t a complete innocent. I was already wise to the fact that an awful lot of American sitcoms back then had leading characters who were widowers with offspring – thus allowing the scriptwriters to have cuddly family-oriented father-and-little-son scenes, but also the possibility of Dad having (perfectly chaste, of course) romantic episodes with female guest stars. The Andy Griffith Show; My Three Sons; The Courtship of Eddie’s Father etc. etc. There were plenty of shows of that era that pulled this particular stunt.

So there was Sheriff Andy with the soppy stuff involving “Opie”, played by Ronnie Howard.

I enjoyed seeing Sheriff Andy always besting his incompetent and jittery deputy Barney Fife, played by Don Knotts. This was because there was a boy at my school who had an uncanny resemblance to Don Knotts and therefore whom everybody called “Barney Fife”. He hated it, which meant the teasing persisted, and it didn’t help that his name really was Bernard. Schoolboys are cruel little buggers.

But the moment of truth came one day when I was watching charming Mayberry, with Sheriff Andy going about his business and helping old ladies across the road and giving wise homilies to Opie; and Barney Fife doing something amusingly cretinous; and Aunt Bee making apple-pie to serve on the ironed tartan-patterned table-cloth.

And my Dad takes his pipe out of his mouth and says : “Have you ever thought how odd it is that there are no blacks in this Southern town?”

And from that moment, I wasn’t able to see the show in quite the same light.

Dad was right, of course. In the whole eight years of The Andy Griffith Show (or at least the ones we saw broadcast in New Zealand), there never once was a black character, never once was any mention of contentious current events involving different races (this at the height of the civil rights struggle), never any suggestion that Mayberry consisted of people other than nice, white, mono-cultural churchgoing Southerners; though I do remember one episode in which an Englishman passed through as a tourist and pleasant fun was made of his quaint ways and funny accent.

Thanks to Wikipedia, I know that Mayberry was apparently based on Andy Griffith’s real hometown, Mount Airy, North Carolina. I discover that this is a hill town with, as it happens, very few blacks in its ethnic mix. It’s your white Baptist Bible Belt. At the same time, again thanks to Wikipedia, I know that nearly a quarter of the total population of North Carolina is black (21.5% to be precise). So my father’s point remains a valid one.

Funny to see a Southern town without any blacks in it.

You may think I am making heavy weather of something trivial. I mean, it was only a sitcom, for God’s sake. I wasn’t expecting serious dramatizations of current event in a piece of escapist fun, was I?

Indeed not. But my father’s question made me suddenly and uncomfortably aware of how much television builds its fantasy worlds by omission.

Nobody could accuse The Andy Griffith Show of being racist. I’m sure you could go through every episode and not find any demeaning comment made about race, any vulgar reference to “niggers”, anything calculated to cause disharmony between ethnic groups. But that’s because, in its alternative vision of the South, blacks simply didn’t exist. They were written out of the script.

We hug artificial dreams created by cutting bits of reality out of them.
Posted by Nicholas Reid at 9:00 AM

Email ThisBlogThis!Share to TwitterShare to FacebookShare to Pinterest
Labels: PROPAGANDA BY OMISSION, Something Thoughtful