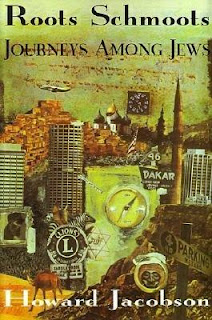 When I read a book that investigates the development of national identity, like Ron Palenski’s The Making of New Zealanders, I immediately wrestle with the question of what national identity is anyway. This in turn makes me think of ethnic and linguistic and religious identity. And my mind goes back to a book I read nearly twenty years ago, in which a witty author gives a vigorous drubbing to many of the pieties that are supposed to be honoured by his own ethnic group.

A man, in other words, who knows that there’s more to being human than adhering to a particular ethnic (or national) group.

The travel book Roots, Schmoots is a Jewish author’s scolding of a lot of received Jewishness.

A few words on the author. Howard Jacobson is an English-Jewish Manchester-born Cambridge-educated novelist, columnist and writer of non-fiction. He’s written eleven novels and volumes of short stories and won the 2010 Booker for his novel The Finkler Question. Though definitely (and vocally) not American, his comic tone of voice has most often been likened to New York Jewish writers like Philip Roth. Jacobson is an atheist-inclined agnostic, but he is no bigot about it. He once appeared in a televised debate supporting the proposition “Stop bashing Christians – Britain is becoming an anti-Christian country”. Despite his satire and criticisms of aspects of Jewish life, Jacobson is also a vocal opponent of the anti-Israel lobby, especially the Jewish part of it. He has sometimes taken on Noam Chomsky for the dodgy scholarship and questionable knowledge of history behind Chomsky’s anti-Israel statements.

For my peace of mind, I also have to add something peculiar. The English-Jewish novelist Howard Jacobson is no relation of the equally-talented South African-Jewish novelist Dan Jacobson. I say this because both men have written novels that put a modern interpretation on Biblical stories – The Rape of Tamar (Dan’s) and The Very Model of a Man (Howard’s). They sit side-by-side on my bookshelves.

Now after all that, let’s return to Roots, Schmoots.

The descendant of “Litvaks” (Eastern-European Jews – especially from the Baltic region), Howard Jacobson at the age of fifty was profoundly contemptuous of pious and overly sentimental books written by Jews seeking out their ancestors. He was determined not to write such a book himself. So Roots, Schmoots is as much a flight from, as a reconciliation to, his own roots.

In this travel book, Jacobson for some of the journey leaves behind in England the (Catholic, Australian) woman he was married to at the time. (He has been married three times in all.) At first he travels among English Jews. He is clearly both amused and alarmed by the recent resurgence in very conservative Orthodox Judaism in England. His secular sympathies are always in evidence.

The book really hits its stride, however, when he crosses the Atlantic. Over half of Roots, Schmoots gives his impressions of Jews in the United States.
He goes to the Catskills, where traditional Jewish holiday camps of the “Borscht Belt” are now down on their luck as they are either taken over by (exclusivist) Orthodox Jews, or close down as their wealthier clientele make for warmer places like Miami. Even so, he still finds Jewish parents battling for places at table and trying to play match-maker with their eligible grown children.

He goes to New York. The Lubavitcher cult wait for the Messiah in the person of an elderly rabbi. In the SoHo art-world set, Jews act out fantasies of being characters in a Woody Allen movie. Brighton Beach has become down-at-heel and shabby. Jews, newly arrived from Russia, have hopes of making it rich by selling Judaica to New Yorkers, but meet with complete indifference.

Jacobson heads west. He looks at a Holocaust museum – and is unimpressed. He goes to a gay synagogue where they pray for those who have died of AIDS and women who died in illegal abortions (“the martyrs of the sexual revolution” as Jacobson puts it). He goes to a Protestant church where a Jew-for-Jesus is preaching. For no particular reason he also goes to a Mormon tabernacle. He visits Boot Hill in the hope that he can find some Jewish connections with the Wild West.

In the second leg of his journey Jacobson goes (this time with his wife) to Israel. He has some strong and often unpleasant impressions. One is the anti-Arab extremism of the Jewish “settlers” on the Left Bank, who tend to be Orthodox and puritanically-conservative and who clearly hope for the construction of an exclusively Jewish theocracy. Another is his natural sympathy for the old-style Jewish socialists living in the dwindling number of functioning kibbutzim. And there is his discomfort at the shabbiness of tourist attractions in Haifa.

Only in the last few chapters is he able to go where his more recent ancestors came from – Lithuania. He witnesses a chilly state, at that time just beginning to thaw out from Communism, but with all the Soviet-era discomforts still in place. Among Jews there, he detects fear of a resurgence of anti-Semitism. After much searching he finds the unkempt and untended Jewish cemetery where most of the village whence is grandparents came are buried. He has, at least for the purposes of this book, found his roots.

Jacobson’s style throughout is sardonic and peppered with one-liners, like a travelling stand-up comic. The book sometimes wanders off theme (why did he visit that Mormon tabernacle?) and is best read in short bursts. As it is an insider’s book, Jacobson is licensed to make jokes at the expense of his fellow Jews. Sometimes the tone is that of an agnostic English gentleman who is contemptuous of tradition (especially religious tradition) and feels the past is something to be escaped from.

There are some interesting insights. One is his judgement that the Holocaust “industry” (as he calls it) too often reduces Jews to the status of helpless victims, and feels compelled to depict non-Jewish European peasants as illiterate oafs. This is how he reacts to the Holocaust museum in America at which juncture, surprisingly, he also says some negative things about Elie Wiesel. At the same time, even though he is an agnostic, Jacobson instinctively sides with the religion of his ancestors when it seems to be under attack (he is very contemptuous of the Jew-for-Jesus).

There is another aspect of his agnosticism which I find revealing. At one point he visits a mainstream synagogue with the sentimental desire to fully participate in a service, just for old time’s sake. He is horrified to discover how blandly secular and lacking in traditional ceremony and colour the service now is. I’ve found exactly the same attitude in agnostics of Christian background when they put their noses inside a church for the first time in years. They come for a purely aesthetic buzz and instead are annoyed to find people who actually believe in this religious stuff unadorned. Jacobson’s attitude reminds me of Melvyn Bragg, in his recent superficial book The Book of Books – about the English-language translation of the Bible – lamenting the language of the defunct Anglican Authorised (“King James”) Version, and wishing it could still be used in churches. Never mind what’s being said, just so long as it sounds quaint and euphonious.

When I’ve said all these things, though, the best thing about Roots, Schmoots is the way Howard Jacobson judges his own community by broad, humanistic values. He’s sometimes affectionate, sometimes negative and often satirical about fellow Jews, but he’s never under the illusion that they are a special category of humanity exempt from human weaknesses, follies and misjudgements.

If you like, you could say it’s a book about the limits of ethnic identity.
Posted by Nicholas Reid at 9:01 AM