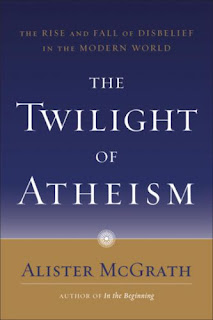 In writing positively of Professor Neil Broom’s Life’s X Factor, I have probably just offended a certain number of readers of this blog, who might be wary of, or even hostile to, religious concepts being discussed seriously.
Oh well.

I might as well be hanged for a sheep as for a lamb.

So in this week’s “Something Old” I plough on into a polemic most definitely written from a religious point of view.

Alister McGrath is professor of historical theology at the University of Oxford, and Principal of Wycliffe Hall. His viewpoint is therefore that of an informed academic Protestant. Alistair McGrath is also a former atheist. He therefore sometimes writes with the zeal of a convert.

In The Twilight of Atheism, he argues that true atheism, a complete rejection of the idea of God, far from being on the rise in the Western world, is actually in decline. Certainly churches in the West have been progressively emptying and in the few countries (such as New Zealand) where a specific religious census is taken, there has been a rise in the “No Religion” option. But this cannot be taken to mean a rise in real atheism. More often, it is either simple indifferentism or a rejection of a specific denominational label, leaving a large part of the population still with religious assumptions, attitudes and inclinations, but without a framework for them. And, despite the loud polemic of Dawkins, Hitchens et al, the number who identify themselves as atheists is in decline.

As McGrath argues it, real atheism is historically and culturally conditioned. It is essentially a reaction against the abuses of religious belief or of church institutions. It is at its most vigorous and authentic when it is oppositional. Corrupt or overbearing church establishments provoke resentment and hard-core atheism. Thus the pre-revolutionary Catholic Church of France gives rise to a Denis Diderot; the “Established” nineteenth century Church of England  throws up a Charles Bradlaugh; and the pre-1917 Russian Orthodox Church turns out atheist Nihilists and Marxists. In all three cases, there was a church establishment that was intolerant, had too much power, and was identified with the state.

Conversely, argues McGrath, when there is plurality and clear religious tolerance, atheism loses purpose and withers away into marginalised crankiness. Few people are interested when there is no intolerant religious establishment to kick against. As he sees it, atheism is a product of modernism – the materialistic belief in the scientific improvement of humanity – but has faded in the post-modern world in which real diversity of viewpoints is respected.

Furthermore, atheism has continued to remain on a narrow cerebral level and has failed to capture many imaginations. Atheists may be able to show their reasons for disliking religious belief, and may be able to score points in public debates when giving such reasons. But this is essentially a negative thing. When it comes to showing how atheism per se gives meaning, purpose, direction and colour to life, there is apparently little atheists can say.

On the historical level, McGrath makes much of the facts that (a.) whenever atheism has had the unfettered power churches once had, it has itself rapidly become a persecuting establishment (e.g. the regimes of Hitler, Stalin, Mao etc.) ; and (b.) the fastest growing ideology in the present age is Pentecostal Christianity, in Africa and Asia, because it really does speak for and through the oppressed.

With much personal soul-searching (as a Protestant), the author defines the main ailment of the modern world as the separation of the spiritual and the quotidian. For this he largely blames the Protestant Reformation and its (to use the Oxford historian Eamon Duffy’s phrase)  “stripping of the altars” and removal of religious rituals and reminders from everyday life.

An early Protestantism that fetishised the “word” of the Bible, and condemned or smashed up religious art, religious processions and other lived-out elements of a faith, was a Protestantism that paved the way for a purely cerebral assessment of the world, for an absence of corporate belief and consciousness, and hence for personalised secularism. It took the mainstream Protestant churches a couple of hundred years to understand this, and then to begin to creep back into the more celebratory and colourful forms of public worship that they had abandoned in their initial break with Catholicism. To give the most obvious example, the forms of worship of the Anglican Church were plain, bare, non-sacramental and very “Protestant” from the late sixteenth century when the Anglican Church was established, until the early nineteenth century, when the Oxford Movement and then “Anglo-Catholics” began to re-make Anglican forms. What some misinterpret as the “ancient” rituals of the present Anglican Church (vestments, sacramentalism etc.) are, in the main, less than 200 years old and very much imitated from Catholicism.

I found much of McGrath’s argument sympathetic and well-researched. Certainly it is true that lack of orthodox religious belief is not the same as atheism. More often it indicates the uncommitted attitude that says “Ooh….ah….um… I dunno” or “I’ve never thought about it really”. To become an atheist is to make a leap of faith, which very few people do. (No, mes enfants, atheism is no more based purely on “reason” than theology is.) Much of McGrath’s historical commentary is also well-reasoned and –presented.

McGrath is, however, writing a polemic and The Twilight of Atheism sometimes has the crudity of a polemic.

As you can see if you look them up on-line, initial reviews of this book tended to divide along the lines of the reviewers’ personal beliefs and prejudices, so it was inevitable that the likes of The Freethinker would bollix it. Even so, I can agree with those who argue that McGrath has not fully comprehended the beast that is post-modernism, and that he is being altogether too optimistic in assuming that post-modernism will be fertile ground for the resurgence of religious belief. Au contraire, post-modernism relativises and diminishes the significance of everything, including religious belief. There is the additional fact that the resurgence of militant Islam (hardly noted by McGrath) has recently provided much ammunition for those who push the “religion-causes-conflict” fallacy.

I would also take issue with the whole chapter McGrath devotes to the bigotry of the American atheist propagandist Madalyn O’Hair. Through the story of this particular manipulative and mentally-unbalanced woman, the chapter does more-or-less make the valid point (pace the more naive assumptions of Diderot and others of the Enlightenment) that atheism does not necessarily lead to an enhanced morality. Even so, it strikes me as a very ad hominem form of argument. If atheism is discredited by its neurotic American propagandist, then how does Christianity stand with its money-making American tele-evangelists? If you’re arguing against the crude polemics of a Christopher Hitchens, you shouldn’t stoop to the dishonest tactics of a Hitchens.

Some weeks ago, I looked at The War of the Windsors [check it out on the index at right], a biased “history” with an anti-British Monarchy theme. I noted that I, too, don’t have a great deal of time for the British Monarchy, but this doesn’t mean that I endorse any old rope written against it. The Twilight of Atheism is not the same sort of book. It is written by a scholar, contains genuinely scholarly observations and has a robust central thesis. Even so, in its weaker spots I repeat my cry “Non tali auxilio!”
Posted by Nicholas Reid at 9:01 AM

Email ThisBlogThis!Share to TwitterShare to FacebookShare to Pinterest
Labels: Alister McGrath, Something Old, THE TWILIGHT OF ATHEISM – The Rise and Fall of Disbelief in the Modern World