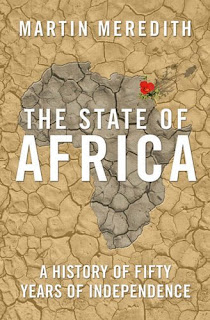 About Afghanistan, I am an uninformed person, knowing little more than what the superficial mass media have told me. I am therefore grateful for a book that tells me more. Reading Marianne Elliott’s Zen Under Fire has, however, put me in mind of another book about a much vaster area of the world suffering from poverty, violence and dodgy leadership.

Martin Meredith is an Oxford-trained historian who has held university positions but who prefers to work outside Academe as an independent writer. His specialty is Africa. He has written books about apartheid, Nelson Mandela and Robert Mugabe, while his most recent book, Born in Africa, is an account of the search for the origins of human life in Africa.

I think it’s fair to say, however, that his best-known book is still The State of Africa (which has also been published under the title The Fate of Africa).  As I have remarked before on this blog [see the review of Paul Preston’s The Spanish Holocaust], reading the 688 pages of Meredith’s text - before notes and index - is like being hit repeatedly over the head. It is a very depressing experience.

The State of Africa is quite simply what its subtitle says – a history of Africa in the last half-century since imperial colonisers left the continent. Meredith gives as full a narrative as he can from the 1950s to the present. There were the early hopes for equitable governments once independence was gained. And then – in all but a handful of cases – there was the general descent into dictatorship, repression, civil wars, famine, attempted genocide and hopeless corruption. The story of state after state is told as methodically and as unsensationally as possible. From Ethiopia to Zimbabwe; from Algeria to Uganda; from Libya to Angola.

In all, about three nations on the continent have been able to establish anything like ongoing democracy with regular multi-party elections. Apparently across the continent the per capita income in real terms now is less than it was in 1980. In most African countries, it is less than it was in 1960, roughly the time when they were just becoming independent. This means that in material terms, the great majority of Africans are now worse off than they were when they had colonial masters.

It is of course numbing to read case after case of failure. Repeatedly class and ethnic divisions are revealed to be the basis for most African political groupings. This  reinforces the obvious historical fact that the borders of nearly all modern African states were the creation of 19th century European imperialists, who drew up their maps regardless of the diverse ethnic mixes they were dragging together.

Meredith acknowledges that during the Cold War, Big Power rivalries stirred up and armed many warring groups in independent African states. Hundreds of thousands of African lives were lost as the USA and USSR fought proxy wars. But Meredith’s main argument is that Africa’s failure is largely the result of poor African leadership. In nation after nation, African “big men” seized power in order to enrich themselves and their clans or cronies. The term kleptocracy has been applied. Even resource-rich African countries have been systematically looted and impoverished by a tiny and unrepresentative African power elite.

The State of Africa has quite rightly been praised for its well-researched detail, avoidance of jargon and refusal to deal in abstractions. Meredith offers no post-colonial (or post-modernist) excuses for the evil that he chronicles. If the state of Africa is woeful, it is because specific human beings have chosen to make it so. This is a work of academic rigour but it does not read like an academic text.

Regrettably, as I know from visiting some ill-informed blog-sites, there are some people who draw from The State of Africa exactly the message that Meredith does not draw. I refer to those who have seized on the book as evidence that Africans are incapable of governing themselves, and that their former white masters always knew better. To such neo-imperialists, were they to read the book more carefully, Meredith offers no ammunition. He makes it clear that the only solutions to Africa’s chronic woes will come from a combination of massive Western aid and better African leadership. (As things stand, aid given without strict direction will simply be aid misappropriated). Meredith also shows that there are plenty of capable African administrators and leaders – it’s just that they have been thwarted regularly by the armed thugs.

When I first read this book, I recall walking out my front door and looking up and down the street where I live. It happened to be the day the rubbish was collected. I thought of the book’s desolate, hopeless landscape of suffering. I gave thanks that I live in a country where the rubbish is collected.
Posted by Nicholas Reid at 9:01 AM

Email ThisBlogThis!Share to TwitterShare to FacebookShare to Pinterest
Labels: Martin Meredith, Something Old, THE STATE OF AFRICA – A History of Fifty Years of Independence