Not everything worth reading is hot off the press. In this section, we recommend "something old" that is still well worth reading. "Something Old" can mean anything from a venerable and antique classic to a good book first published four or more years ago. 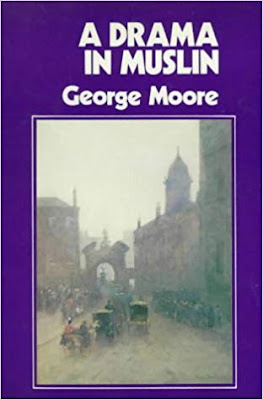 It must be the historian in me, but sometimes I find very imperfect old novels interesting, because they reveal things about the age in which they were written. Case in point – George Moore’s A Drama in Muslin.


You will find elsewhere on this blog comments on other, and better-known, works of the Irish-turned-English author George Moore (1852-1933). They include Esther Waters (1894) and The Lake (1902), generally regarded as his best work, and his gossipy three-volume autobiography Hail and Farewell (1911-1914), which mainly concerns the Dublin literary scene of his age. These were all written when George Moore was well-established as a literary figure. But I also looked at his lesser-known early Zolaesque novel of alcoholism A Mummer’s Wife (1884). This was his first novel to make any real impact, and A Drama in Muslin followed two years later.


How does A Drama in Muslin reveal things about the age in which it was written? Because it deals with that nineteenth century phenomenon of the “marriage market”, in which gentry and middle-class arrivistes attempted to marry off their debutante daughters to the most eligible, and preferably richest, bachelors. Special interest comes from the fact that this novel is set largely in Dublin, and its characters are ambitious wealthy middle-class Irish Catholics, a minority among the largely Anglo-Irish Protestant socialite elite. Given that it was both written and is set in the 1880s, there rumbles uncomfortably in the background, as an ominous “noise off”, the agitation of Charles Stewart Parnell’s Land League and the tension between Irish peasants and their rack-renting landlords – many of the latter being exactly the social class that seeks spouses in the “marriage market”.


The novel follows the fortunes of three convent-educated girls in the marriage-stakes, Alice and Olive Barton and May Gould. Most important of these girls is Alice Barton, who develops as the novel’s main character.


Active, social-climbing Mrs Barton and her ineffectual-but-wealthy husband Arthur want their daughters to marry aristocratic titles. Into the Dublin debutante “season”, they thrust both plain, intellectual Alice, and her beautiful, frivolous sister Olive. Mrs Barton prevents Olive from marrying a penniless beau, and dangles her before a wealthy aristocrat, darkly hinting that the peasant agitation will rob him of the lands that provide his only income, so he would be wise to marry a middle-class girl who has wealth. But Mrs Barton’s plan backfires. The aristocratic feller chooses to marry another debutante. Not only does Olive not snare a husband (as well as injuring herself in a botched elopement), but late in the novel, still unmarried, she reveals to her sister Alice that she has fled to London because she was sick of the marriage-mad atmosphere among her social set in Dublin and the way she had been feted as the “belle” of the season.


Meanwhile Alice, the novel’s real protagonist, has been growing intellectually. In the Dublin “season” she befriends a flashy novelist who has what were then considered as advanced ideas. Her views are changed by him – among other things she drops her Catholicism and becomes the type of superior agnostic that George Moore himself became. (Indeed, given some of her judgements, she becomes something of a prig.) But Alice’s novelist friend proves not to be a potential husband. Instead, Alice begins to earn an independent income as a writer. Against her parents’ objections, she marries a doctor who is a practical solid citizen and who shares her intellectual interests. The obvious irony of this tale is that the feted belle Olive remains husbandless while the overlooked, plain Alice has found a solid marriage with a man who admires her for her mind (a touch of the Jane Eyres here?). In her marriage, she finds domestic peace and a space in which to pursue her writing career. A good marriage is a matter of choice, not a matter of being pushed into something by your parents for the sake of social advancement. 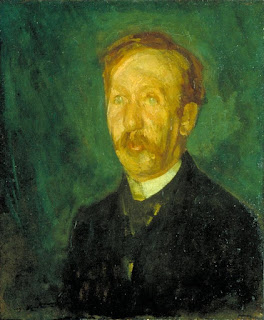 To say Moore is hostile to the whole idea of debutante-ism is an understatement. Clearly the novel is telling us that putting up young women for what amounts to an auction is no basis for happy marriages. As for the parents and hangers-on around such social occasions as debutante balls, Moore becomes vitriolic. He speaks of one debutante ball at Dublin Castle – seat of England’s Viceroy in Ireland - as containing “another band of underlings who swarm about this mock court like flies about a choice pile of excrement”. (Book 2, Chapter 3)


He does, of course, fire off shots at some of his favourite targets. There are two strong subplots – one concerns the debutante May Gould, who gets pregnant to a debutante’s delight during the “season” and has to go away to have her baby in secret. Here is revealed the hypocrisy of a decorous social event which is often a cover for illicit sex – and, despite the period euphemisims and rows of dots eliding sex-scenes, it is heavily implied that Mrs Barton herself is having an affair with one of the Anglo aristocrats. Then there is the matter of religion. The other subplot concerns the hunchback Lady Cecilia Cullen, who develops into a religious fanatic. From being a self-righteous tract-distributing evangelical Protestant, she becomes a Catholic and enters a convent. The implication, underlined by Cecilia’s vindictive man-hating stance, is that it is sexual frustration and hysteria which drive her to take the veil. More persistent as an attack on religion is the characterisation of Alice Barton, with her repulsion from the Catholic mass and her equation of the Catholic religion with the ignorant peasantry.


The novel has many highly satirical passages contrasting the social frivolity of the gentry and upper-middle-classes with the poverty of the peasants and the urban lower classes. Ultimately, the courtship rituals of the “season” are trivial in comparison with the agitation over land. And yet, typically, Moore’s views are compromised. He is fully aware of the injustices that were done to the peasants and the rottenness of the social system under which they laboured, and he deplores these things. But at the same time he despises the peasants for the “superstition” of their religion; generally depicts them as a dirty rabble; and comes close to saying they are irredeemable. This is the view expressed by Alice’s doctor husband late in the novel, when he sees the peasants kowtowing to their hated landlords once the agitation has come to nothing. One remembers that George Moore was himself a landlord, in his early thirties when A Drama in Muslin was published; and his liberal impulses stand against his material interests. This cements for me the image I have long had of Moore – that he was essentially a “clubland rebel”, willing to wave the flag for social reform so long as it did not affect him in any way.


It may be superfluous to add that, typical of its age, this novel has a few moments of pure melodrama, but they are generally kept in their place. And, despite Moore’s tendency to overstate his case, there is a real sting to some of his comments on the way young women are used as currency to gain wealth. The anarchists were wrong when they said all marriage was simply long-term prostitution, but the 19th century “marriage market” provided some limited vindication of their view.
Posted by Nicholas Reid at 9:01 AM

Email ThisBlogThis!Share to TwitterShare to FacebookShare to Pinterest
Labels: A Drama in Muslin, George Moore, Something Old