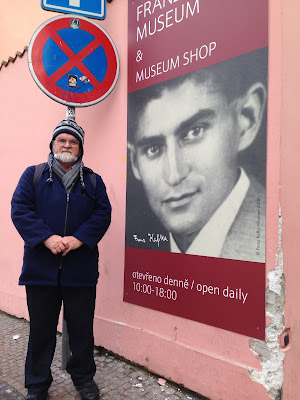 I am going to begin this post with a bland and plodding narrative culled mainly from my diary – but it does lead to a point, so be patient, dear reader.


Five months ago I, for the first time, visited the city of Prague, and spent a week there with my wife, looking at most of the things that tourists look at. Among other things, I was interested in visiting any memorials relating to Franz Kafka.


We had already encountered street signs referencing Kafka, and a couple of plaques on old buildings, telling us they had once contained apartments where Kafka had lived briefly. Following a map, we walked across the Charles Bridge and proceeded up a crooked alley where our map told us the Franz Kafka museum was. So long was the alley, that we were on the verge of retracing our steps, thinking we had gone the wrong way. But we found the place, and one of the pleasantest things about it was that in this, the off-season, it was not thronging with tourists. The centre is in a courtyard, in the middle of which is a shallow pool in the shape of the new Czech Republic, with David Cerny’s mobile statue of two men facing each other and pissing into the water – an ironic comment on the split of old Czechoslovakia into two states, the Czech Republic and Slovakia. 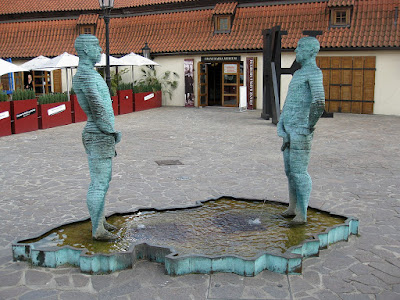 We paid at the shop on one side of the courtyard, crossed with our tickets to the other side and entered the museum.


It is not a collection of memorabilia as such, but is really dominated by light-and-sound exhibits and very detailed and informative placards. The woman at the desk spoke English, but with a nearly impenetrable accent. She directed us upstairs and we followed displays about Kafka’s fraught relationship with his father and his relatives; and about his schooling.The centrepiece was a 15-minute-or-so film of (silent motion picture) scenes of Prague and its various quarters, filmed in Kafka’s time in the 1910s and early 1920s.


We had spent about half-an-hour looking at this when we went downstairs again and were heading for the exit, thinking the display was rather meagre. But the woman-with-the-impenetrable accent stopped us, and did something which she apparently has to do often. She advised that upstairs there was a small – and easily-missed – sign directing visitors through a narrow opening to where the rest of the museum was. Back upstairs we went, thinking that hidden and difficult entrances sounded rather Kafkaesque.


Through the entrance and we found ourselves looking at displays about Kafka’s working life as an insurance assessor. The most interesting things in this section were Kafka’s own sketches (he was a gifted sketch artist) reflecting his sense of confinement by the bureaucratic round. Another section emphasised the influence of his Jewish culture and how he had been impressed by travelling Yiddish theatre troops that he saw. There has even been the suggestion that his Metamorphosis was influenced by a Yiddish play he saw, concerning a beggar reduced to crawling around on his belly. There followed a section on his three or four main girlfriends, to one of whom he was briefly engaged. It is likely that he was still a virgin when he died of tuberculosis at the age of 40. There has been a vague and unsubstantiated rumour that he fathered a child on one of his women, but the child died young. Next there were analyses, and some short atmospheric films, relating to Kafka’s major works like TheTrial and The Castle. It was interesting to be informed that apparently “In the Penal Colony” was the only story of which Kafka ever gave a public reading (as opposed to reading to a circle of friends); and it was a disaster because its description of an instrument of torture caused one woman to faint. Even more interesting was the context of this story – it was written during the First World War, and the Austro-Hungarian Empire had brought down very restrictive censorship laws with heavy penalties. It was a very repressive time, influencing Kafka’s mood when he wrote the story. With reference to “In the Penal Colony”, placards cited Foucault’s theory that the apparently humane banning of public executions led torture and execution, now hidden from public sight, to become even more refined and sadistic. It is the sort of story that gives credence to the idea of Kafka as the prophet of totalitarianism.


A walk through this museum ends with the history of how Kafka’s (German language) books were published – the major novels all published posthumously – and then how they at last got a wide Czech readership. In the late 1930s there was a project to publish all Kafka’s works in Czech, but it was scuttled during the Nazi occupation. After 1948, Kafka was basically banned under the Communist regime, which saw his work as typical of the decadent bourgeoisie. In the early 1960s, there seemed to be a thaw, and there was even a literary conference on Kafka in Prague… but again the authorities cracked down. As a result of this suppression of his work, Kafka became part of dissident culture, and was adopted as one of the icons of the “Velvet Revolution” that disposed of the Communist regime in 1989-90.


Incidentally, all the signs and placards in the Kafka Museum are in Czech and English, showing how ubiquitous English is as the language of tourists. The only signs in German are direct quotations from Kafka’s works and from letters to and from friends.


Thus for my bland and plodding narrative.


But – apart from celebrating a very good fit-for-purpose museum – what is my point in telling you all this? Simply this. Kafka is now a tourist icon – a man whose image is presented in tourist brochures, postcards, posters and illustrated maps like any other tourist attraction. When you cross what appears to be the border between the “old city” (preserved for tourists like us) and the modern city of Prague, you may find yourself in a square, next to a large and brightly-lit restaurant where we chatted with a loquacious Slovak waiter. And in the square there is a huge, shiny, stainless-steel mobile statue, again designed by David Cerny, of Kafka’s head. It turns in segmented layers, constantly constructing and deconstructing the image of Kafka. It is (to appropraie a word from Hemingway) a fine piece of work, again designed with a certain irony. Kafka sees clearly and then he disintegrates. Kafka sees clearly and then he disintegrates. The mystery of literature… 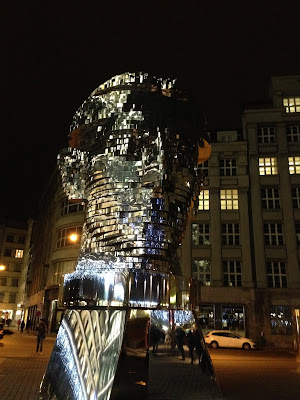 Yet, say I, does this mean that Kafka has become only an image, rather than somebody to be read? A piece of cultural coinage rather than an author? Something to be ticked off your tourist bucket list? People can say “Kafkaesque” and more-or-less know what it means without actually reading The Trial, Metamorphosis etc. (Likewise in Prague, people can see a string of eateries called Svejk, illustrated with images of the dumb-as-a-fox Czech soldier, and more-or-less know who he was without having to read Jaroslav Hasek’s Good Soldier Svejk).


The focus on Kafka is ironic, given that the author was allergic to publicity and had a temperament opposed to public displays and vulgarisations. The focus also cuts out other people who could be remembered. In Prague, I asked at a tourist office if there were places commemorating a Czech author who intrigues me; the dated-but-still-very-interesting Karel Capek, the man who (with his brother Josef) introduced the word “robot” to the world and whose freakish science-fiction works still resonate, even if his plays are no longer produced. I was told that there were no places honouring Capek in Prague (the city where he died), but the city council was ‘thinking about” restoring the villa which was his last residence.


It is Kafka, then, who becomes a brand name to sell tourism – a little like the Shakespeare industry in Stratford on Avon. Dear reader, I know this is the fifth time in this piece that I have used the word, but there is a huge irony in this. The alienated Jew surrounded by Christian gentiles; the German-writer surrounded by Czech speakers in Prague – has become the symbol of this secular post-Christian Czech-speaking gentile city. 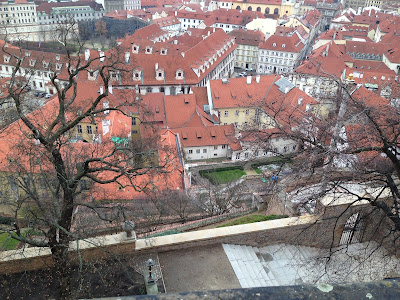 Email ThisBlogThis!Share to TwitterShare to FacebookShare to Pinterest
Labels: Author into Tourist Icon, Something Thoughtful