SOME PROBLEMS WITH CULTURAL SENSITIVITY


Forgive me if, for the second consecutive posting, I draw on my recent time in Europe to give you a tale with a sort of message.


In Amsterdam in early December last year, my wife and I went on our third visit to the van Gogh Museum. As always, it bewitched me with its chronological survey of the great artist’s development, from his early, sombre paintings of Dutch peasants to his impulsive images, with sturdy brush-strokes, of crows in the cornfield and (his last completed painting) tree roots.


But this time, there was a special exhibition in the basement. It concerned van Gogh’s French friend Paul Gauguin. In 1887, long before he headed for Tahiti, Gauguin made his first major trip outside France spending four months in the French colony of Martinique in the Caribbean, an island (the placards told me) 70 kilometres long by 30 kilometres wide at its widest point. With him, Gauguin took his friend the painter Charles Laval, who was later to die at an early age.


As my photos now remind me, a placard near the entrance warned us (in Dutch and English) “Some of the letters by Gauguin and Laval quoted in the exhibition contain terms with a racist, colonial and disparaging basis. We are fully aware of this and disassociate [sic] ourselves from the use of these words.”


We walked slowly around the exhibition, looking carefully at the two painters’ work. I found myself thinking that, at least at this time, the unknown Laval was, as a painter, almost the equal of the well-known Gauguin. Both artists often used solid blocks of colour to depict large parts of their landscapes.


Although the term wasn’t used, a reproof of “cultural appropriation” was implied in some of the exhibition’s placards. It was noted that Gauguin (much more than Laval) tended to portray the female indigenes – especially the “porteuses”, or women who were carriers – rather than the males. His Martinique women, even when carrying heavy loads or harvesting, are presented in languorous poses, as if they are taking their rest or playing. This image was far removed from the toilsome work on colonial plantations, which by this time really occupied most of the inhabitants of Martinique. To me it was very significant that Gauguin chose to linger near the shoreline, while it was Laval who ventured into the interior and painted its mountains and rough country. Gauguin’s Martinique was sun, sand, luxuriant growth (especially palm trees) and women. 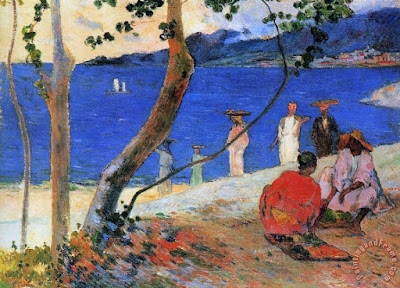 In both Martinique and Tahiti, Gauguin saw himself as visiting and immersing himself in nature pure and uncorrupted, and getting away from the polluting constraints of European civilisation. But he created an idyll of an unreal world. He forgot that he, as a Frenchman, was part of the French “civilising” process. He was the serpent in the garden.


Now you will note that in what I have written so far, I have skewered Gauguin by presenting him as we are now currently encouraged to do.


But, as I admired his paintings,  here is what I really thought of him. I thought – doesn’t every painter create an unreal world, made of his own imagination as much as of objective reality? I thought – unwitting colonial or not, wasn’t Gauguin as least refreshing and finding himself as an artist in this new environment? And, more important that any other consideration in this context, aren’t the paintings themselves, at their best, brilliant things, indeed masterpieces of early modernist art? To train ourselves to despise such works in terms of a current social critique is to justify being a philistine or a propagandist – and probably both. I have no objections to the placard advising us of some language which is now unacceptable – yet in fact I found very little of such language in the few letters that were quoted. But I do object to the push to belittle an artist in terms of ideas that were, quite simply, out of his range of consciousness.


Nearly two months later, in late January of this year, we were in Paris. The day was grey and rainy but we had checked first which galleries and museums were open (unwary tourists are sometimes frustrated to find that in Paris, some galleries and museums are closed on odd weekdays). Then we walked down the Blvd.Madeleine, through the Place de la Concorde, across the river and up the Quai d’Orsay to the very modern museum called the Musee du Quai Branly / Jacques Chirac. Once upon a time, such a museum would have been called “ethnographic” and would have revelled in pointing out “scientifically” the primitive customs of inferior peoples. But this museum was very careful to distance itself from such an approach, and to explain each exhibit and artefact with respect. 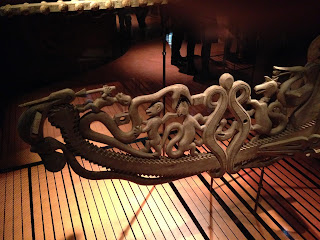 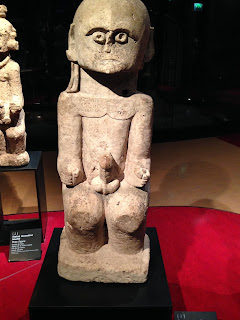 The museum divides into four great halls – Oceania, Africa, Asia and the Americas. At various points we were advised that some exhibits had been acquired from older – and now defunct – museums that celebrated the old French Empire. But most of what the Musee du Quai Branly / Jacques Chirac contains has been more recently acquired. We hired English-language audio-guides and headed for the Oceania hall, which covers everything from the Malay archipelago and what it calls “Australasia” (by which it means New Guinea and the islands north of Australia) to the easternmost Pacific. Here we lingered long, at first hunting out every number that the audio-guides promised to explain…. A fascinating collection, but I was amused by the way the English voice mispronounced the names of Maori gods when it came to the New Zealand section (Tane rhymed with pain; Rangi rhymed with mangy). Of course this sort of thing made me wonder how many words from other parts of the Pacific had also been mispronounced without my knowing it. 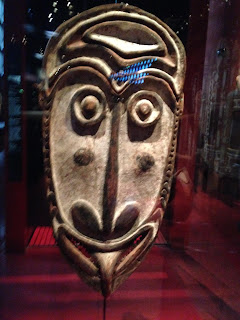 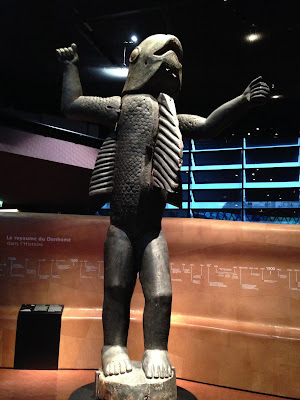 We spent an equally long time in the Africa hall, the artefacts and art-works in which range from the Sahara to the furthest south, by way of Madagascar and the Congo. We were particularly taken by the life-sized statues made in Benin at the time French colonial rule was beginning to be imposed – statues which related chiefs to their totem animals; and by the elaborate and big wedding garments worn by North African women; and by the wall paintings which decorated Ethiopian Christian churches (not frescoes, but paintings done of canvas and hung on the church walls). In fact, in the Oceania and Africa halls there was so much to see and be intrigued by that we began to suffer, after about four hours, from that most shameful of tourist deseases, “culture fatigue”. We were wearying. We made only the most cursory of tours of the Asia and Americas halls before we left, fully understanding that nobody can appreciate in one day all that a really great museum has to offer. 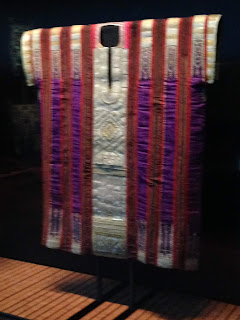 But in the midst of our too-brief survey, also spent some time at an upstairs special exhibition called “Paintings from Afar”. And here comes my second comment for this post on cultural sensitivity. 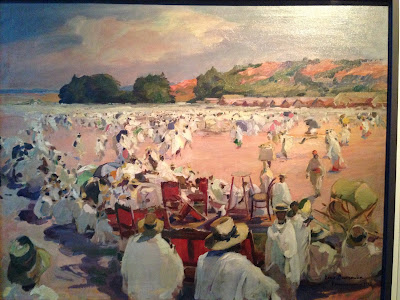 The exhibition consisted of paintings by European (mainly French) artists in the late 19th and early 20th centuries. The paintings were of exotic places like the Sahara, Egypt, Algiers, Tahiti, Mauritius, Martinique and Madagascar, most of which were at that time part of the French Empire. Placards and our audio-guides explained that many of these works had been, and continued to be, kept in storage rather than displayed, as they reflected old colonial attitudes and a contorted view of “the other”. There were the expected warnings against the crime of Orientalism and carnal white men’s daydreams about odalisques in harems and dusky maidens in the Pacific. As in the Gauguin exhibition in Amsterdam, the term “cultural appropriation” was never used, but it was implied in the reminders that many of these works were commissioned by steamship companies and colonising agencies in the 1910s, 1920s and 1930s, and some had appeared as part of the great exhibition in Paris in the 1930s vaunting the French Empire. 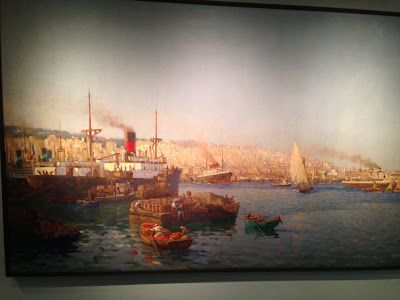 
But, as I have so often found in this sort of chastening exhibition, the worst that could be said of most paintings was that they showed things that were not inauthentic or demeaning, but things that were atypical, such as noble Arabs posed on their steeds against the desert sunset. There were huge canvases which, my wife correctly remarked, looked like old-fashioned travel posters. But there were also excellent landscapes and – as the 20th century advanced – admiring and realistic portraits of non-Euopean people. 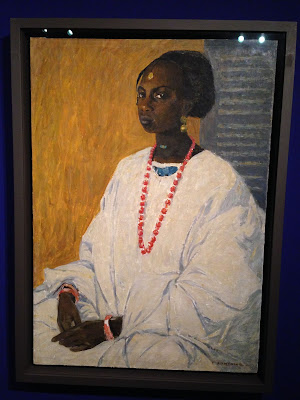 The cautions against racism and misrepresentation were fair enough. But I do wonder how modern post-colonial critics actually expect artists from one culture to depict another, for, even if the style of art was old-fashioned, a good part of this exhibition struck me as perfectly honourable and unprejudiced depictions of real things. Desert landscapes soaked in the deep pink of sunset. Steamships in the harbours of North Africa.  Stalls in an Egyptian market.   Tribesmen gathering at a river. Take away the very few really offensive images, and all that is objectionable about these paintings is the fact they were made in the age of empire.


Sometimes sensitivity about other cultures can be simply too sensitive.

Email ThisBlogThis!Share to TwitterShare to FacebookShare to Pinterest
Labels: Some Problems with Cultural Sensitivity, Something Thoughtful