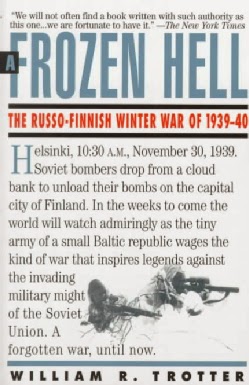 Even a few years after publication, an historical account can remain significant because few other English-language studies have appeared on the topic. By chance I bought a copy of William R. Trotter’s A Frozen Hell: The Russo-Finnish Winter War of 1939-40 in a second hand bookshop. The proprietor told me that interest in this work remains high and he rapidly sold the few copies he had in stock.
From the outset Trotter explains why accounts of the diplomatic and political aspects of the Winter War have fared much better in English than its military aspects have. Finland was remote and did not figure as highly in accounts of events during the Phoney War period of World War II, which was when the Winter War occurred. It became ‘forgotten’ when subsequent conflicts took place. 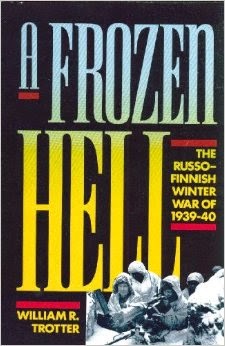 Stalin was furious at the humiliation of Russian defeat after a few weeks’ campaign. Victory would have been part of his 60th birthday celebrations, so Soviet records cover only the subsequent war against the Soviet Union (June 1941-September 1944) which Finns call the “Continuation War”. All Russian prisoners of war who had been returned by the Finns, and many commanders, were packed off to NKVD camps near the White Sea to be “re-educated” and/or shot. The only Soviet account of the Winter War is a brief reference in Nikita Krushchev’s memoirs as part of his criticism of the Stalin era. Even post-Soviet Russian accounts remain sparse for lack of contemporary Russian documentation.
So the most detailed accounts of the war have appeared in Finnish, which is admittedly a most difficult language. William Trotter has a reading knowledge of the language and supplemented his study with interviews with veteran combatants and others.
Though Trotter discusses diplomacy briefly, the implications for foreign relations and the subsequent “Continuation War”, the bulk of his account follows much the same approach that Anthony Beevor takes in his books Stalingrad, Berlin and D-Day of recounting campaigns in detail and chronological order.
As background he explains that under tsarist rule the Russians “left the Finns to their own
devices " and “military service for the tsars was a favourite route for ambitious young Finns … and until the revolution of 1917 Finland supplied more than 400 generals and admirals for the imperial forces, not least of whom was the hero of the Russo-Japanese war of 1904-5 named Gustav Mannerheim”. Another Swedish-Finn who profited from Russian military training was General Harold Öhquist who was to become Mannerheim’s second in command during the Winter War

(a.) Although the swastika was the emblem of the Nazi flag throughout the Second World War, no Nazi aircraft were identified by it whereas the Finnish aircraft were. Long before Nazism came into being, Finland had the used the ancient Sanskrit emblem as a symbol of good fortune. The swastika inscribed on some of Finland’s orders of honour is not related to Nazism.
(b.) This is not part of Trotter’s book but lodged in Finnish archives is a recording made in 1942 when Hitler visited Finland. Mannerheim arranged for them to have lunch in a railway carriage and unbeknown to Hitler had their conversation secretly recorded. Although some commentators have cast doubt on the authenticity of the recording, Finland stands by its claim and has about 11 minutes of the conversation on disc. It is intriguing to hear Hitler speaking in a different tone from that of his mobile rousing oratory familiar from newsreels and radio broadcast recordings. In usual Hitler fashion he turns the luncheon conversation into a monologue in which one can hear the occasional aside from Mannerheim.  One can hear it with an on-screen English translation on Hitler meets Mannerheim monologue (with subtitles) YouTube
Posted by Unknown at 9:01 AM