My long-laid plan to read all of Emile Zola’s 20-volume series of novels, the Rougon-Macquart, is still far from complete. I have managed to read about half of them in the original French, and then a couple of the more famous ones (Germinal, La Bete Humaine) in English translations. It is, believe me, quite a haul to read in their original language 20 novels each of which, in the Livre de Poche paperback editions that sit on my shelves, runs to about 500 pages. That totals, in case your Maths is almost as feeble as mine, about 10,000 pages. I will get there one day. Promise. But I’m afraid other reading will distract me until I am able to take a very, very long holiday.
Anyway, I often wonder what the attraction of Emile Zola (1840-1902) is to me when 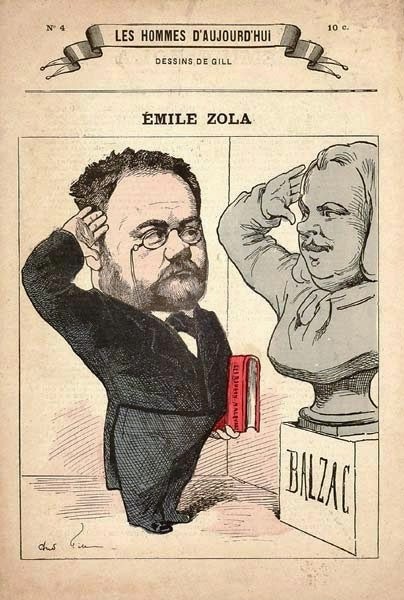 I find his determinist conception of human nature and his reductionist representation of human institutions almost totally repugnant. Partly it comes from my being a Balzacian, interested in that dogged French attempt, begun by Honore de Balzac in La Comedie Humaine, to summarise the whole range of a given society in one big roman fleuve. Even in his lifetime, Zola was seen by French critics as somebody who was trying to outdo Balzac [see accompanying cartoon]. Partly my interest comes from the sheer melodrama into which Zola nearly always descends – the man who documented scrupulously the external and material details of life was definitely not capable of subtle psychology, and there usually comes a point in his novels where, to round things off and bring his tale to a neat conclusion, he suddenly jerks his characters into the most improbable of events so that he can reach an explosive finale. And partly my interest comes from the way Zola reflects a certain period in history. Maybe this last attraction is, to the historian in me, the strongest. Zola’s very imperfect novels are ersatz historical documents.

This is certainly the case with one of the most obscure and least-read of the series, Son Excellence Eugene Rougon. Zola, writing in the 1870s after the Third Republic had been established, dissected in his whole roman fleuve the Second Empire of Napoleon III. In this particular novel, he focuses on the upper reaches of the regime’s political system. Son Excellence Eugene Rougon is the story of a high official in Napoleon III’s government and his many flaws. The story specifically unfolds between 1856 and 1861. The clearest aim of the novel is to expose the undemocratic nature of the Second Empire and the sham of “democracy” when the regime claimed to be “liberalising” in the 1860s. Zola is attacking the special interest groups that had the ear of the non-democratic government (especially provincial bourgeois entrepreneurs – all of whom seek to be honoured with imperial titles). As usual, he is likewise attacking the church, which sought to bring Napoleon III’s regime into the defence of the Papal States in Italy. At the same time, Zola wishes to expose patterns of patronage when there is no real popular voice. Very incidentally, he also enjoys depicting the sheer tackiness of imperial ceremonial, as if Napoleon III’s court and its hangers-on are at best play-acting at being the masters of the nation and do not have the real sense of style of the first Napoleon or even of the old royal courts.
His protagonist, Eugene Rougon, comes from a humble background and has made his way into high office by sheer cheek and graft. He hails from Plassans, the fictional town which Zola based on his hometown of Aix-en-Provence and often used to represent provincial France. Eugene is regularly besieged by people from Plassans who ask him for special favours. Near the beginning of the novel’s fourteen long chapters, Eugene has just lost his position as president of the Conseil d‘Etat, Napoleon III’s inner circle of ministers. Much of the action that follows concerns his attempts to regain a position as a member of the emperor’s cabinet and to outmanoeuvre a powerful political rival, the Comte de Marsy.
Eugene falls in with the intrigues of an influential Italian woman, Clorinde Balbi, whom he hopes to make his mistress. She marries another politician, Delestang, and Eugene Rougon himself makes an advantageous marriage with one Veronique Beulin d’Orchere, whom he treats mainly as a domestic convenience to help him host his political soirees. Eugene continues to think of power without actually finding a way to exercise it. He dabbles in political science by planning to write a study comparing the English and French constitutions, but he never gets on with it. He thinks of abandoning national politics for schemes of public works in the provinces. He is a dilettante and a schemer rather than a real thinker. He still hopes that Clorinde Balbi, who has been the mistress of many influential men, will help him attain greater power. 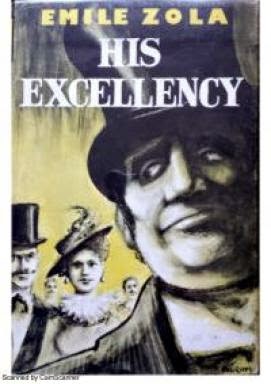