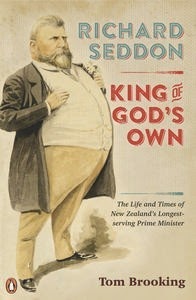 It’s quite easy to summarise the legend of Richard John Seddon and the Liberal Party, which used to be standard issue in school textbooks and popular histories. It said that after a sort of ill-defined thing called the “continuous ministry”, the Liberals were New Zealand’s first properly organised political party and achieved power with a clearly-defined platform; and that after the brief premiership of John Ballance, the party hit its stride with “King Dick” Seddon, New Zealand’s longest-serving prime minister (1893-1906). So roll on votes for women, old age pensions, harmonious industrial relations thanks to the Industrial Conciliation and Arbitration Act and a wise policy of busting up big estates and opening up the land to hundreds of cockies. This was the standard legend of “King Dick” – the bluff, plain-spoken forward-thinking man who laid the foundations for a more egalitarian New Zealand and presided over the “social laboratory” as it pioneered the welfare state.
But alas! It is in the nature of History to be always re-written and revised. Revisionists came along to tarnish this received image of Seddon. It was argued that Seddon was only a reluctant supporter of women’s suffrage, might have been in the pockets of the booze interests in opposing Temperance, was certainly racist in his attitudes towards Chinese, did not necessarily help Maori interests in the land policies he endorsed, and was an imperialist in calling enthusiastically for New Zealand’s participation in the Boer War. In other words, said the revisionists, he was more a man of his own age than the harbinger of anything better.
Further to this I must note that, when I once taught at Otago a summer school paper on the Liberals, the book I most frequently cribbed was David Hamer’s The New Zealand Liberals – The Years of Power 1891-1912 (published 1988) – still an indispensible book, by the way – which argued that the Liberals were a very diverse bunch, far from the cohesive force of schoolbook legend, and that the diverse social interests the party attempted to represent inevitably dragged the party apart.
In writing his authoritative and capacious biography Richard Seddon, King of God’s Own, Professor Tom Brooking makes it plain that he has to contend both with the legend and with a revisionism that has sometimes got out of hand. Email ThisBlogThis!Share to TwitterShare to FacebookShare to Pinterest
Labels: Richard Seddon King of God's Own, Something New, Tom Brooking