Nicholas Reid reflects in essay form on general matters and ideas related to literature, history, popular culture and the arts, or just life in general. You are free to agree or disagree with him.
POLITICAL LOYALTY MEANS FORCED LAUGHTER

By the time you read this, New Zealand will have voted in a general election and the Scots will have voted over whether or not they wish to be independent. You will already have had a day or two to adjust to the new situation, shrug your shoulders and realise that the world has not changed in any essential way. Political commentary, political satire, songs proclaiming “John Key is a Dick” or decrying “Planet Key” will no longer have any effect upon you. They will already be the rags of history, fading into the time, which you will soon forget, in which the issues seemed important to you. You will set aside your political engagement and think of other things until the next election threatens.
I, however, am writing this on the dark side of the election, when the media are still awash with opinion polls, guesses, speculations, nose-thumbing, satire, gossip, predictions and all the other things that are part of the run-up to an election.
This dismal interlude puts me in mind of the dire subject of political humour.
Political satire is one thing – the vigorous jests against policies and personalities; the ridiculing of pomposity; the lampooning of party leaders. All good fun, I suppose, and a necessary part of the democratic process. But I have noticed that those who laugh loudest at political satire are those who are already predisposed to agree with the satirist’s viewpoint. Be honest with yourself over this one. How often and how loudly do you laugh at the political satirist who is attacking what you want to attack? And how sullen and unamused do you become when the satirist, with equal skill, attacks those things you support? Suddenly you see what an unfair thing satire is and how wide of the mark the satirist’s jokes are. Be honest now – you do, don’t you?
But I’m not thinking of straight political satire. I’m thinking of partisan political humour. And partisan political humour makes me think of three separate examples, which seem to mean something.
At least I think they do.
First example: Some years ago, a major New Zealand political party hired some comedians as a warm up act for their election campaign launch. The comedians performed for about five minutes before the “serious” stuff started. Television coverage included the comedians’ gig. The comedians’ jokes were all partisan, all tuned to ridicule another political party and all unfunny as hell. The reaction of the live audience in the hall was interesting. At first there were few laughs. Then, when it was realised that this sorry stuff was being seen on national television, the laughter got louder. But it was all forced laughter. The message was “We have to laugh at this stuff because it’s in support of our party. The loudness of our laughs proves not that we are amused, but that we are loyal to our party.” This was political humour at its worst, where the politics took precedence over the humour.
Second example: Building on the same idea. Charlie Chaplin’s 1940 film The Great Dictator is still talked up in some books as a great political satire, the film that blew Hitler away with gales of laughter and so forth. You will even find some old buffers who say that the bombastic and sentimental speech at the end is a great piece of oratory. I dissent from these views. Having seen The Great Dictator a number of times, I judge it flat, a clumsy piece of film-making and largely a succession of obvious sight gags whose only merit is that they are designed to ridicule Nazis. If you think this judgment is harsh, all I can suggest is that you see the film itself (or re-see it if you last saw it in childhood) and decide what you think. 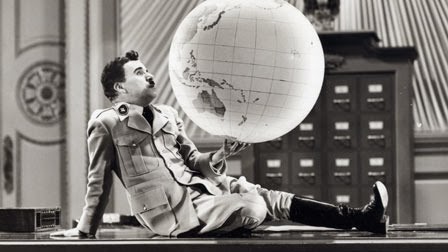 Of course I can understand why wartime audiences might have loved it, because it’s comforting to see a powerful enemy reduced to ridicule. But I am bemused about its continuing reputation. My suggestion is that many assume a satire on Nazism must be a good thing, and therefore overpraise this flat, repetitive and poorly-scripted comedy because it is on the side of the angels. At a film festival a decade or so back, I saw a very good feature-length documentary about Chaplin and his films in which many interviewees fronted camera to hail Chaplin’s genius. But there was one prominent dissenter. Woody Allen said how unamused he was by the famous scene (often reproduced in stills) in The Great Dictator where Chaplin’s version of Hitler plays with a globe, tossing it up in the air and dancing balletically with it. “That’s a metaphor’” said Allen “but that’s all it is. And a metaphor is not funny.” I agree. I can watch The Great Dictator as interesting historical datum, but laughter at it is the forced laughter of dutifully applauding in political agreement. 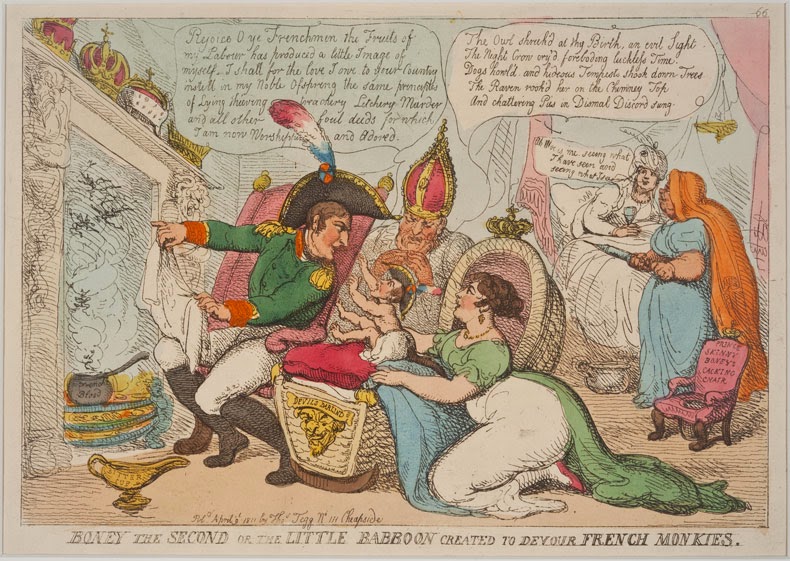 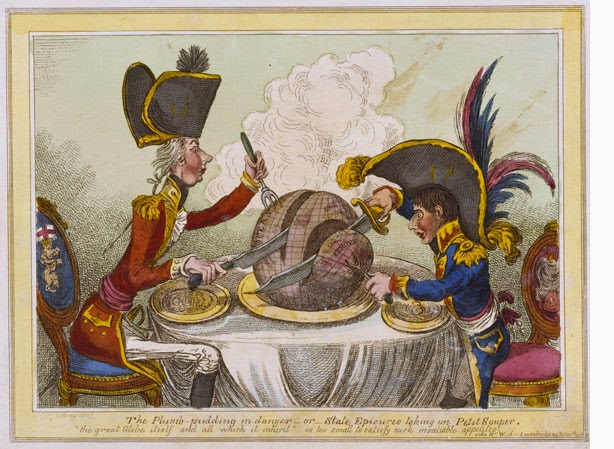 Third example: Quite the opposite message from this one. Has it ever occurred to you that some political humour is funny in spite of its political message? I look no further than the English political cartoons of Gillray and Rowlandson that were produced – usually with the full approval of Pitt’s government – at the time of the French Revolution and Napoleonic Wars. They were, in effect, a species of official propaganda, designed to belittle or ridicule the French and political enemies of Pitt’s government such as Charles James Fox. I look at their political intent with distaste. Two hundred years away from their partisanship, I still see them as satirical defences of a conservative oligarchy in the face of a rising democracy. But – dammit – they are funny. Gillray’s “The Plum Pudding in Danger”, where Pitt and Buonaparte carve up the globe, is funny where Chaplin’s deployment of the globe is not, because of its gross caricatures. Ditto Rowlandson’s sarcastic response to the birth of Buonaparte’s heir. Maybe the passage of time has done this. Set aside the political intent and we are left with expert buffoonery. In the end, something is funny because it is funny, and political humour is not humour at all if it is only political.
Posted by Unknown at 9:00 AM